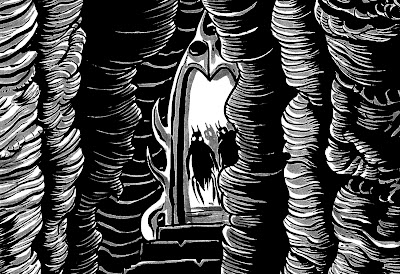 Posted by jasons at 6:45 PM No comments:

Click the link above to check out the Kickstarter for my adventure book.
Check it out and then pledge with the reckless abandon I've come to expect from readers of this blog.

We were all set to launch the Kickstarter for Operation Unfathomable today, but, to the consternation of myself and my allies at the Hydra Cooperative, we hit a technical snag that can only be resolved on the KS end. Once we clear this hurdle, its go time. Sorry for this unexpected delay, people. Stay tuned for updates as they become available.

We Search the Heap of Detritus

Here's another table excerpted from Operation Unfathomable (game details removed due to the stringent system-free policies of this blog), the adventure book by me.
The Kickstarter to make this book as beautiful and functional as it should be launches tomorrow!

Underworld detritus
The segmented giant and local agencies maintain main thoroughfares, piling up heaps of fallen stone, mineral accretions, and other garbage along the sides of corridors (as indicated on the map). In a pinch, Underworld travelers sometimes bury themselves in this loose debris to avoid unwanted encounters. If adventurers risk a turn searching, they stand a 2 in 6 chance of finding something.

That’s okay! It was probably hilarious and maybe it wasn’t even your fault. It’s really dangerous around here. Fortunately, you took the time to prepare a spare.
But the rest of the party is still deep within the Underworld.


How Does My New PC Show Up?
d12
1. Swallowed by a colossal trans-planar worm back at home, proved to be indigestible, deposited in the Underworld, smells terrible
2. Formerly held under mind control by Chaos godling, now broken free and slowly recovering original personality (but must save or fall back under godling's influence, if encountered)
3. Employee of sorcerer from Ft. Enterprise exploring a cave for spell components (add two caps of azure fungi to inventory), fell down a fissure and woke up lost in the Underworld
4. Member of rival party who entered the Underworld just hours before, comrades destroyed almost immediately after arrival by cloud of poisonous gas, you: safely off relieving self in alcove
5. Sudden storm while staggering home from the tavern again, knocked on head by wind-swept debris, picked up by eldritch tornado and dropped into the Underworld following a spectacular and uselessly prophetic dream sequence
6. Doomed fling with vampire ended abruptly at the outset of what was supposed to a romantic holiday in the Underworld, now free of spell and disgusted with self
7. Got really drunk fell asleep in the street, woke up tied in a sack on the back of a lizard-driven cart trundling down The Devil’s Highway, managed to tumble off, slither behind stalagmite but still hogtied
8. The wizard said he was teleporting me to the Big City, boy did he screw up, plus I picked up a mark of Chaos for my troubles
9. Set sail for unknown shores, ship smashed by kraken, sucked down a whirlpool, emerged from nearest Underworld well, pool, river, swamp, sea, etc.
10. Answered ad for dungeon gig, patron turns out to be serial killer with a thing for adventurers, killed horribly, but instead of ascent to heaven, anomalous reincarnation in the Underworld
11. Confined to bed with fever from lethal plague, witch appears in room at midnight with curative potion, works but also transports you to the Underworld
12. Poisoned by a giant spider while on a picnic, dragged to cave lair for consumption, cave breached from below by spider-eating mutant mole, titans clash blocking exit, only way to safety: down the hole and here you are (equipment limited to picnic gear)

Excepted from Operation Unfathomable, my adventure book coming soon from the Hydra Cooperative. A Kickstarter for this book launches Monday October 10. Watch for more information here. 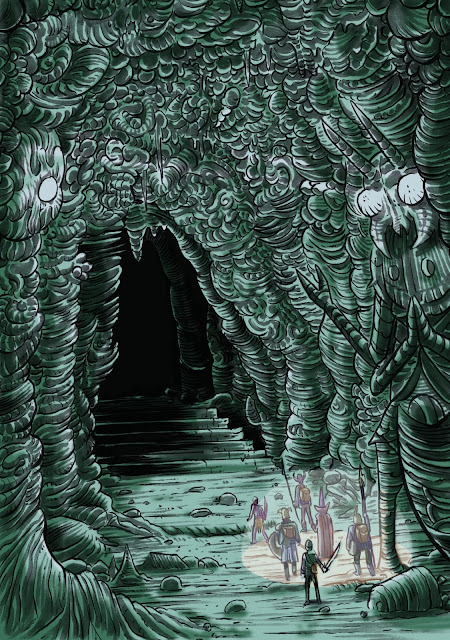