Blog-o-versary and other announcements

The Dungeon Dozen turned one year old this month. It's been a fun year and I'd like to express my gratitude to everyone who's taken the time to read, comment and/or help me promote this blog. To celebrate I'm taking a short break to recharge the ol' batteries and attend to some other pressing and not-so-pressing matters, including a short adventure I hope to post here on or around the 25th as a holiday gift to readers.
Also, THE REQUEST LINES ARE OPEN! If you have any ideas/wants/needs for a d12 table please suggest away in the comments and I'll do what I can to deliver once I get back on the stick.
Thanks again, everyone!

d12
1. Must be honored with the celebration of elaborate festivals
2. To be depicted upon all regional coinage
3. New song to be composed (and performed) in honor fortnightly
4. Constant stream of tasty virgins
5. Staff of skilled attendants shall be provided for primping/preening
6. Full security force dispatched for (100% guaranteed) hoard protection during hunting trips and other sojourns
7. Monumental architecture/colossal statuary to be erected in image following demolition of offensive depictions of local heroes/deities
8. Crafting of enormous bedazzled crown, set with every conceivable gemstone in grotesque, ostentatious abundance
9. Human sacrifices to be made weekly to draconic deity
10. Nearby dungeon treasuries to be raided, contents delivered (intelligence provided)
11. Knighthood abolished
12. Destruction, subsequent ban of all anti-draconic weaponry

Posted by jasons at 6:41 PM No comments:

Email ThisBlogThis!Share to TwitterShare to FacebookShare to Pinterest
Labels: Dragons

Featured on the Wilderness Map

Email ThisBlogThis!Share to TwitterShare to FacebookShare to Pinterest
Labels: Wilderness

Email ThisBlogThis!Share to TwitterShare to FacebookShare to Pinterest
Labels: Wilderness

d12
1. Will hunt down and burn the families, friends and acquaintances of any who dare enter lair
2. Will release toxic bile into the water table, perverting it for all time
3. Will topple every tower in the kingdom starting with the tallest
4. Will enter a state of preternatural fecundity, spreading it's vile progeny like a plague upon the land
5. After establishing air supremacy, will burn only most favored crops
6. Will unceasingly bombard royal palaces with its foulest excrement
7. Will take a single virgin each night starting with the most ravishing
8. Will assume the form of a man, rise to the throne, resume dragon form, and set forth to establish empire of open evil
9. Will intercept each and every shipment of wine entering the realm
10. Will intimidate the various regional forces of evil into fealty and embark upon unprecedented campaign of terror and wanton destruction
11. Will self-detonate it's massive inner stores of fire, exploding with the force of a smaller atomic bomb, taking the adventures and everything in the dungeon with it in a final act of defiance
12. Will escape with its hoard to squander ancient treasures on games of chance and other trivial amusements

Email ThisBlogThis!Share to TwitterShare to FacebookShare to Pinterest
Labels: Dragons

Recently Swallowed by the Mile-long Serpent

d12
1. The only cleric capable of restoring the monarch to mental and physical health
2. Several heads of state thought to be at secret meeting
3. Wagon full of wine barrels desperately needed for local festival
4. Demigod's arms and armor worn by (deceased) impostor
5. Total population of migratory herd beasts including the prophesied sacred calf
6. Band of heroes hidden inside a giant wooden mouse
7. Caravan transporting sacred relic for holy day festivities in capitol city
8. Stone sarcophagus containing mummy of ancient king that will plague the living with 1000 curses should the seal be broken
9. Crash-landed flying saucer containing envoys from advanced civilization w/dire warning re: imminent arrival of blind idiot space gods
10. Entire tower of an infamous sorcerer rumored to have made revolutionary breakthroughs in arcane arts and sciences
11. The royal librarian and a great swath of the royal collection including several invaluable/irreplaceable volumes
12. Pirate vessel and ship's compliment, just made port following extremely profitable reign of terror

Email ThisBlogThis!Share to TwitterShare to FacebookShare to Pinterest
Labels: Monsters and Terrors, Wilderness

Under the Evil Wizard's Hat 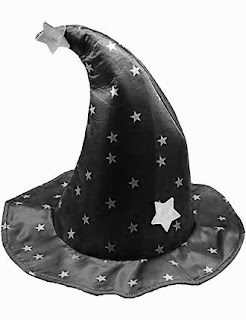 Posted by jasons at 5:32 PM No comments:

d12
1. Emaciated ogre, master of an unknown mystical discipline, levitates in lotus position over carpet with a few copper coins on it
2. Evil bard busker plays dirty song parodies lampooning surface world mores for spare change collected in ridiculous many-plumed hat
3. Abandoned dungeon pets (evil hounds w/spiked collars, sabre tooth monkeys in charming outfits, two-headed cats etc.), their moist, imploring eyes burn holes through the hearts of sympathetic characters
4. Ousted dungeon boss and surviving cronies wander miserably, pleading for aid and arms with which to exact revenge upon the new hierarchy
5. Humanoid victims of a weird dungeon plague look to any and all for assistance, even if it is only the release of oblivion
6. Surviving clergy from a sacked dungeon temple, their raiment torn, stripped of valuable icons, faces streaked with bitter tears, shamefully question their god's omnipotence while self-flagellating, ask only for hard tack
7. Clinically depressed leprechaun, naked but for once-glorious pantaloons, tells sad tale of ruination and would gladly accept anything that might add sparkle to his otherwise empty pot
8. Master thief and assassin who lost both hands in botched attempt at disabling green slime trap will hide in shadows for food
9. Fledgling adventurer, the sole survivor of a doomed expedition, is about to die of thirst
10. Impecunious man apes unable to obtain employment lie around in a stinky heap surrounded by empty bottles calling out to passersby for aid in keeping their bender going
11. Vampire initiate of ascetic cult asks for only a few drops of blood to sustain itself while closing in on full enlightenment
12. Vagabond kobolds camp in the middle of the corridor so you can't avoid their incessant pleas

Posted by jasons at 8:22 PM No comments:

d12
1. Depraved cretins w/strong sense of entitlement (2d4)
2. Tavern sage holds down corner of bar: answers simple questions for a drink, buy a round for the house for more complex inquiries
3. Surly drunks embittered by years of being surly (2d4)
4. Some guy who's really loud and thinks he's hilarious
5. Raucous gaggle of pickpockets emboldened by drink
6. Black lotus addicts waiting around for their connection to show, rather edgy
7. The guy who has strident opinions on anything he happens to overhear, not a particularly deep thinker
8. Pack of ruthless, armed-to-the-teeth dwarfs celebrating successful delve
9. Inebriated laborers fomenting uprising, much speechifying and little regard for alternate opinions
10. Tattoo artist plying trade in well-lit corner: save vs. infectious diseases, heavily inked sycophants openly question the machismo of the un-inked
11. None of the regular patrons mess with the strangely lumpy hooded figure at the out-of-the-way table who orders and downs ale after ale, would rather feign a fainting spell than even acknowledge the existence of this perpetually thirsty entity
12. Off-duty assassins amusing themselves by subtly pitting various patrons against one another then sitting back to enjoy the ensuing mayhem

When You're Starving in the Dungeon

d12
1. Rumor has it amber dungeon mold is edible, delicious even
2. Moderately edible dungeon lichens, once washed, chopped, pulverized, sieved, fried
3. Leather armor (used), soaked in wine for a long time
4. Gathering an accumulation of semi-fresh dead bats will do for a while
5. Herds of extremely alert tiny deer are rumored to roam the deeps, some kind of blind and great patience required
6. Goblin cheese, a euphemism for some unmentionable aspect of their biology, edible but only just, reeks with an unparalleled potency, pretty good spread on black bread with lots of onion and mustard seed
7. Giant beetle grubs can be found underneath loose flagstones
8. Rats work, but often carry weird parasites, sometimes benevolent
9. Bocanite, a semi digestible element in many dungeon walls, visible only to some dwarfs
10. Notable delvers claim giant centipede legs are a delicacy fit for a king's banquet hall
11. The excrement of elusive dungeon ungulates (basically just processed moss and lichens) provides a good bit of fiber
12. Sometimes it comes down to whether you hired that extra torchbearer

Email ThisBlogThis!Share to TwitterShare to FacebookShare to Pinterest
Labels: Dungeons

Living MacGuffins Missing in the Dungeon

d12
1. Narcotics dealer hoping to corner market makes bold move to meet the subterranean source, addicts, particularly those of high station, frantic
2. Zealot priest of God of the Rosy Outlook and rather large re-consecration crew of lay members, indispensible VIPs among them, heading down to facilitate salvation of the denizens with much pomp
3. The whole village woke up one morning in a trance, disappeared into the depths of the earth
4. Faction of cultists in midst of bitter theological schism set fire to their temple in town and vanished below with their sacred treasures
5. Children of the noblesse, dressed in improvised dungeoneering get ups, carried away with make believe
6. The cat that ate the rat that ate the Queen's soul, last seen scampering toward dungeon entrance
7. Animate disembodied head of wizard containing unknown spells spirited off into the darkness by cavern apes
8. Royal architect w/full knowledge of secret castle defences disappeared into dungeon in the company of rabble of thieves and cutthroats
9. Child prophesied to be of the utmost future importance kidnapped by genteel demon with excellent penmanship
10. Dangerous, seditious holy man of newly popular mystery cult said to be baptizing converts in underground river
11. Betrothed of local monarch gone to join harem of amorous and exceedingly charismatic lich
12. Genius brewer, innovator of many new beers and ales, linchpin of local economy, abducted by deep dwarfs for compulsory servitude in their corporate beverage production industry